A Call for Skepticism

Evidence from 8,000 criminal cases has been mislabeled and improperly stored in the Houston Police Department's property room, police said Thursday.

The evidence, much of it from murder investigations, is in 280 boxes and dates from 1979 to 1991, police said. An evidence box should contain material from only one case under department rules.

Police Chief Harold Hurtt said it will take about a year for the department to finish going over the evidence. He blamed the situation on "poor work habits" and "sloppy efforts" by crime lab personnel.

Hurtt said investigators found that Jim Bolding, former head of the department's DNA lab, was responsible for improperly documenting about 900 submissions, some of which dealt with evidence found in the 280 boxes.

I wonder if jurors' expecting police crime laws to follow proper procedures is what one prosecutor was talking about when she said that "Television has put unrealistic expectations on what we can do with technology."

Come on guys - Get it together! Your work-product sends people to prison. If you can't take your jobs seriously, then don't expect jurors to take you seriously, either.

The man who blogs with a hammer will be hosting Judge Richard Posner the first week of December.

Richard Posner--distinguished jurist, founding father of the economic analysis of law, most-cited living legal scholar, scourge of Dworkin and formalist jurisprudents (not to mention admirer of Nietzsche!)--has kindly agreed to blog here, to share some of his views about matters jurisprudential--from Holmes to pragmatism to (one of my favorite Marxian themes in the Posnerian corpus!) the irrelevance of normative ethics--and perhaps other topics as well.

CrimLaw summarizes the case that asks this question: Is rubbing one's genitalia underneath pants in the view of another enough to qualify as "making an obscene display or exposure of his person?"

I'm not sure how to feel about this issue:

When his client's rape trial ended in a hung jury, a defense attorney decided to hire some of the jurors to get advice.

Some cried "foul," but hiring used jurors is an ever more common practice, although it hasn't been talked about much. And while in most states hiring a juror is not a crime or unethical under professional conduct rules, some in the legal community think it's just not right.

In the recent case, Gregory Haidl, 19, the son of a wealthy Orange County, Calif., assistant sheriff, and two of his friends, allegedly gang raped an apparently unconscious 16-year-old girl, and videotaped it. The jury hung, leaning toward acquittal on most of the 55 counts after nearly two months of trial.

It's common for lawyers to want to interview jurors after a trial. Often they don't want to talk, but not so in Haidl's case. According to Haidl's lead counsel, Irvine, Calif., solo practitioner Joseph G. Cavallo, jurors are lining up to work with him. And although all but one of nine has offered to do it for free, Cavallo wants to pay them all.

"I think they should be compensated because they're spending time on the case, time from what they would rather be doing, I'm sure," said Cavallo. "I'm thinking about $50 an hour. It seems to be a reasonable amount."

The full article is here.

Prosecutors Miffed at Burden of Proof

This story reports on the so-called CSI Effect on Arizona law enforcement. The CSI Effect is shorthand for jurors' newfound belief that in serious cases, the prosecution should present physical evidence. In a robbery case, the police should gather fingerprints. In a murder case, the police should send DNA to a laboratory for analysis. Jurors have learned about forensic evidence from a popular CBS show, CSI: Crime Scene Investigation.

Prosecutors are not pleased. Sayeth one prosecutor:


Suzanne Cohen, deputy Maricopa County attorney, says jurors "should expect law enforcement to do their job." But, she adds, "Television has put unrealistic expectations on what we can do with technology."

Prosecutors cite this example to butress their case:

Jurors in Maricopa County Superior Court in Mesa this summer acquitted a defendant in a Tempe commercial burglary case. A witness testified about spotting him and another man dragging out a stereo, and police arrested the defendant a few minutes later with burglary tools in his car.

But jurors told prosecutors after the trial that the police "didn't do enough" while investigating the case and needed to find the defendant's fingerprints inside the building.

I wonder what these "burglary tools" were. Did they include latex or leather gloves, lock picks, etc.? Or did a police officer say that items you and I would ordinarily have in our car are burgulary tools? Based on the quote, it's obvious the police did not find the stolen items in the defendant's car. Why shouldn't a jury want more than a bold assertion that a screwdriver is a "burglary tool"?

A Tempe convenience-store clerk identified an accused armed robber who used a pellet gun in the robbery last year. A second witness saw the suspect run out the store.

Jurors could not reach a verdict, telling prosecutors after the trial that police should have tested a soda bottle the defendant left on the store counter for DNA.

Eyewitness identification is the most unreliable evidence. Mistaken ID's are the single greatest causes of wrongful convictions. Yet prosecutors are angry because a jury wants reliable evidence in addition to eyewitness ID. I can't fault a jury for wanting reliable evidence before sending a man to prison. But I am old-fashioned.

Phoenix police officers approached a group of people standing in an empty lot two years ago and said they saw a man drop a plastic bag containing illegal drugs. Latent fingerprints were never submitted because two officers said they saw the man ditch the drugs and prosecutors thought that was sufficient. Jurors disagreed, acquitting the defendant. They later told prosecutors they wanted the prints.

Ah, the famous dropsy testimony. Maybe the police didn't test for the defendant's prints because they might not be there.

Thousands of people are wrongly in prison based on eyewitness ID's and "circumstantial evidence." Hundreds have been freed after physical evidence has proven they could not have committed the crimes.

If a prosecutors first duty is - as they so often tell juries - to do justice, then shouldn't they ensure that physical evidence, when available, is gathered and tested? What does it tell us about prosecutors when they get angry at jurors who demand that readily available physical evidence be tested?

Man, oh man, what in the world were these knuckleheads doing when they distributed this toy in children's candy? 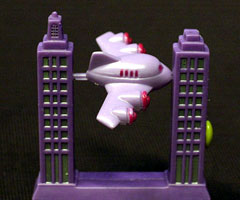 Apropos to my last post, my friend asks: "Conservatives distrust the government to regulate almost every area of law. Why then do they love almost every criminal law? Why do they suddenly become 'law and order' when criminal laws are at issue, but not other government regulations?"

Good question. What do y'all think?

Criminal Defense Lawyers and the Left

I just had this thought tonight, so it's very undeveloped. (Inspired by this post's comments).

Most criminal defense lawyers I know are left-wingers. They trust the government to run healthcare, education, and the economy. Yet these same people are the most vocal critics when it comes to the government's handling of the criminal justice system. This is an area that the government has sole control over. And the government is failing miserably.

Also, many criminal defense (and PI lawyers - who also tend to be leftists) trust juries. They say that everyday people generally come to the right conclusion. There is wisdom in the everyday person.

Why do we trust our fellow citizens when someone might go to prison but then distrust them to handle our country's affairs? In other words, why have the government redistribute their wealth, etc., if they are really so wise? Why not let people (who serve on juries) make their own decisions in other areas?

Sandefur Gets It Right

Writing about his trip to San Francisco, Tim Sandefur notes:

San Francisco is alive. I consider it proof, by the way, that liberalism is better than conservatism. No sane person would prefer to live in Salt Lake City than San Francisco, notwithstanding the socialism.

My wife and I lived in San Francisco last summer (on California & Hyde). It was the best summer of our combined 51 years on this earth. Living centrally in the city, each weekend we'd close our eyes and pick a direction on the map. Then we'd walk.

That's the beauty of the city. You can find something wonderful in any direction - whether it's watching the crowds at the Pier, enjoying the shops in Union Squre, or merely enjoying the exercise of walking through the hilly city. Hell, the homeless people were even such a part of the landscape that we weren't annoyed with them. But San Francisco is not the place for people who have sticks up their arses, or who can't mind their own business.

Each time we walked down Polk Street, we'd smell marijuana in the air. We'd see same-sex couples carrying bags with logos from such-and-such lube shop. We never minded because, quite frankly, it's none of our business if you are smoking marijuana or having sex. However, the city does have somewhat of a degenerate element to it.

My best friend stayed with us on the 4th of July weekend. We watched the fireworks at the Pier and then went to some bars. On the way to one bar we saw a homeless man peeing on the sidewalk (talk about the plain-view doctrine!); I stepped in human fecal matter; and a girl at the bar flashed us - all within about 20 minutes. After being flashed I laughed, looked over to my friend and said, "In twenty minutes you have seen the soul of San Francisco."  And of course, per capita, citizens of San Francisco consume more beer and books than anyplace else in the United States.

Hey, the city might not be for everybody. But as for me, give me San Francisco, or give me...well not death, but everywhere outside of SF does seems a bit lifeless.

UPDATE: I just found this blog (Via the Legal Reader) whose focus in on San Francisco. How cool is that?