Let the Thing Speak for Itself 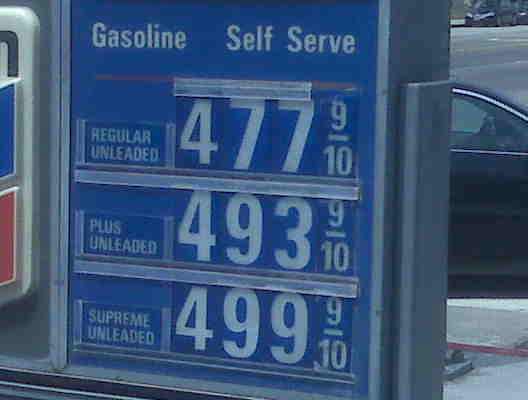 This is creative and aggressive lawyering in action.  Nice job, Norm.

Getting Girls to Lift Weights

Paul Cassell blogs about the problem of ACL injuries in female athletes.  I have a simple solution that will never work.  Make girls lift weights.  It's really that simple.  It's banal to those in the know to note that load-bearing exercise (i.e., weights; none of that pilates or Yoga stuff) strengthens ligaments.

But have you ever tried getting a girl to lift weights?

"I don't want to look like a guy" or "I don't want to get too muscular" in all their various forms is all you'll hear.  As someone who has lifted for years, I only wish it were that easy!  It actually takes years to build a muscular physique.  I beat my head up against a wall having that conversation with my wife.  I gave up.  Some things are too culturally ingrained in the female psyche.

So, as is often the case, there is a simple solution to a major problem.  But the solution will never work.  Go figure.

The puppy killer is being expelled from the Marines.  Details here.

The Dark Side of "Victim's Rights"

There is a dark side to "victim's rights," that is, formal and informal procedures that give the prosecutorial power to the complaining witness in a criminal case.  What is that dark side?

Prosecutions are supposed to be about public justice.  Prosecutors will tell juries: "We do not represent clients.  We represent you, the people."  In theory, that is how it should be.  Yet prosecutors in today's age are often nothing more than plaintiff's lawyers.

Norman Pattis has a client who is charged with behaving badly during a divorce.  I'm not as sympathetic towards his client as he is, but let's put that aside.  Either his client committed crimes and should be prosecuted to protect the public, or she shouldn't.  It's really that simple.

But the complaining witness holds the cards.  He will not drop charges unless she pays him money.  Yes, this is extortion.  No, the prosecutor and judge will do nothing about that.

How then can a prosecutor or judge be claiming to act in the public's interest?  They would dismiss the charges if the husband (after being paid off by the defendant) consented to it.  But the wife won't pay him off.  And thus she languishes in court.

This is a common occurrence, by the way.  In a high profile case, a complaining witness, Nestor Estrada, claimed that Russell Crowe threw a phone at his head.  Felony charges were filed.  If Crowe had been convicted of a crime, he would have been deported.

Prosecutors went forward with the case.  They dismissed the case only after the complaining witness said  (after being paid a lot of money) he did not want the case to proceed to trial.

How is this public justice?  As I wrote then:

Whenever someone tells you about "victim's rights," remember, there is most assuredly a dark side. So-called victim's rights allow private vendettas overcome  public justice.

Due to a recent injury, I haven't been able to do my normal fight training.  I still lift weights and do hard interval training (Tabatas), but to maintain my weight loss, I have do some traditional "cardio."  It's hard reading a book while doing cardio.  I sweat a lot, so the pages get sticky.  And I don't want to watch television at the gym.

Plus, while still young, my brain functions at an optimal rate when I learn new subjects.  Given that I get hit in the head a lot, it's also a good idea to form as many new neural connections as possible.  If you're older, learning new subjects can help prevent a whole host of age-related [sic] diseases.  ([Sic] because it's not age qua age that causes people so many problems later in life.  It's inactivity of the brain.  Yet we blame age.  Nonsense.)

The Teaching Company offers downloads for your iPod.  I downloaded a sample file, and it worked very well on my iPod.  The Teaching Company offers some rocking courses.  I've always been a Philistine when it comes to music appreciation.  I know what I like (hardcore rap when lifting; Afro-Cuban jazz when lounging), but I don't know why I like what I like.  I also don't know what makes music, well, music.

The Teach Company offers a course entitled: Understanding the Fundamentals of Music.  Sixteen, 45-minute lectures should get me through the next three weeks of cardio.

Next on the list is: Philosophy of Mind: Brains, Consciousness, and Thinking Machines.  I almost went to graduate school to study philosophy of mind.  Unfortunately, I haven't thought in depth about these issues in several years.  The course will change that.

Incidentally, each courses may be downloaded for only $34.95.  It appears that both are on sale.  I don't know how long the sale will last, so if you're interested, it's probably a good idea to go shopping now.

Who is the Sexist Here?

Tamara Klopfenstein seems to be a sexist:

According to court papers, Klopfenstein worked for six weeks as a part-time receptionist and data entry clerk. In her suit, she claims that the office environment was tinged with sexism .... After just a few weeks on the job, Klopfenstein claims that a male co-worker invited her to lunch in an e-mail that said "I feel bad you have been working here for a couple of weeks and we haven't gotten to know each other yet."

In her deposition, Klopfenstein testified that she found the invitation "very offensive" because "there is no reason why a man and a woman should go out to lunch together without any other party around. To me that's a date."

Not to me, or most other men in the 21st century.  Women and men work together.  Co-workers often dine together.  This is basic logic.

[T]he centerpiece of Klopfenstein's suit was the ongoing dispute that erupted over her objection to being asked to serve coffee to her male supervisors.

Klopfenstein testified that she acquiesced once or twice, but that she found the request demeaning and embarrassing and believed that they "reinforced outdated gender stereotypes."

I get coffee for whoever wants it.  And I'm a man.  Who knew retrieving coffee was woman's work?  I sometimes even go all the way to Starbuck's and pay for the coffee with my own money.  To buy coffee for women!  Sometimes women who are receptionists.  I'm such a chump!

I think Ms. Klopfenstein should be sent to mandatory sensitivity training.  She obviously has a problem with men.  Her sexism must not be tolerated in today's workplace.

Her lawyers should also be required to undergo mandatory CLE training to combat sexism:

Plaintiffs attorneys Timothy M. Kolman and Rufus A. Jennings of Timothy M. Kolman & Associates in Langhorne, Pa., said in an interview that they intend to appeal the ruling, and that Schiller erred by failing to recognize that some tasks are "inherently more offensive to women."

I wonder how badly that law firm treats their male employees?  Someone needs to investigate that sexist law firm immediately.

Heaven Comes in a Glass

I must have one.  (Irony alert: Not the first ingredient.)

What you are when you have both testicles.

What you become when you lose them.

Not really.  But if you can't get a law license for thinking the Michigan Supreme Court is activist, then a lot of people will need to bite their tongues.