You had better think twice, especially if the company's lawyer is Lois Rosenbaum.  See United States v. Stringer, No. 06-20100 (9th Cir. 2008) (opinion) (stating that Rosenbaum handed over "potentially incriminating evidence" about one client, "apparently in order to further of interests" of her corporate client).

The SEC civil complaint, filed on September 30, 2002, two years after the joint representation began, did not allege a charge relating to the "Swedish Drop Shipment." After Rosenbaum received a copy of the complaint, she called the SEC Staff Attorney, disclosed the existence of the "Swedish Drop Shipment," and facilitated SEC interviews with [another company employee] in order to enhance the level of FLIR's cooperation with the government.

Rosenbaum also sent a memo to the SEC that contained possibly privileged communications she had with Samper about the transaction. The criminal indictment later charged that Stringer and Samper created the false entry. Thus Rosenbaum, while representing ... FLIR, apparently in order to further the interests of FLIR, assisted the SEC’s investigation.

Id. at *9729.  Noting that Rosebaum was not a government informant could indeed be damning her with faint praise.  The case is unfortunate.  If the Ninth Circuit's allegations are true, Rosenbaum's conduct is scandalous.

Even if the allegations are true, it is also unlikely that Sampler could win a legal malpractice lawsuit against Rosenbaum.  Although I have not researched Oregon law: Under the law of most states, you cannot win a malpractice suit against against your criminal lawyer unless you are factually innocent.  Here, it seems Sampler may be guilty - though we'll need to await a jury's final say-so.

The only justice Mr. Samper will get is on this blog page.  Maybe Samper's story will spare others his fate.  Though, alas, it's little solace to a person to have his life serve as a cautionary tale.

The New York Law Journal has a fantastic article on the "honest services" provision of the federal mail and wire fraud statutes.  The backdrop to the article is Tim Donaghy, an ex-National Basketball Association referee who is going to prison for providing insider information (in violation of NBA rules) to bookies.  As regular readers know, the unlimited scope of honest services statute is something we've discussed here before.

This photo, which appeared last year and accompanies reports that melting polar ice caps were literally stranding polar bears in the middle of the ocean, is moving.  I w 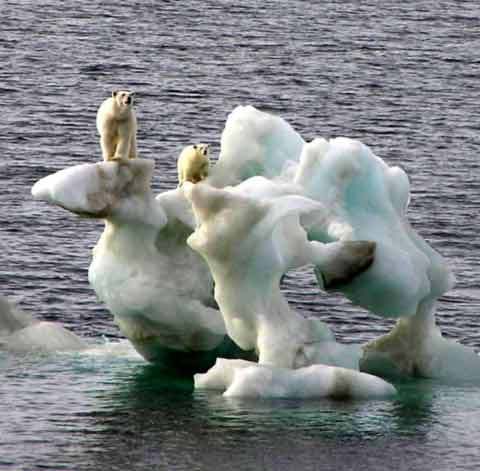 as disturbed for several minutes after looking at it.  I cannot look at it now without wincing.

Polar bears are not nice animals.  They rip our arms off and eat them.  They regularly kill baby seals.

Isn't it a good thing for polar bears to die off?  It means more seals might live.  Yet just about everyone finds this picture moving.

What can those of us who need to persuade others learn from this picture?

Context is everything.  A polar bear is a predator - unrelenting and vicious, red in tooth and claw.  Yet we don't see that.  Instead, we helplessness, which awakens human sympathy.

How can we make other perceived predators appear helpless?

Throughout history, some stories survived, others died.  Those stories that survived lived on despite illiteracy and the lack of the printing presses.  Why did some stories die while others survived?

Survival of the fittest stories is explored in Memory in Oral Traditions: The Cognitive Psychology of Epic, Ballads, and Counting-out Rhymes.

Using research on memory, psychologist David C. Rubin shows that it's no accident that some narratives survived.  The narratives that survived have specific structure, and use specific literary devices - theme, imagery, and rhythm.

Who cares?  Every speaker should.

As a speaker, you must keep your audience's attention.  But the correlation between attention and retention is surprisingly weak.  Many people who eagerly listen to your message very quickly forget it.  As a story teller who needs to create memorable stories, this is devastating.

The best research shows that juries decide cases based on dueling narratives.  They compare the plaintiff's story to the defendant's story; and then jurors construct their own stories.  The party with the winning story wins the case.

Of course, every trial lawyer knows this.  Yet many forget that it's not enough to have a story.  The story must be memorable.

If the jury has forgotten your story, you don't have a voice after the close of evidence.  Memory in Oral Traditions uses example after example (after example) showing what makes sticky stories.

Be forewarned: Memory in Oral Traditions is dense.  It's a book written by psychologists, for psychologists.  The payoff is worth the effort.

Willie Gary Has a Sex Tape?

Something strange is going on here.

What is a practical consequence of deputizing corporate counsel as agents of the federal government?  For one, the Constitution gets thrown into the trash.

As you likely know, several constitutional provisions limit what the government can do to you.  They can't, for example, search you without probable cause.  They can't offer you any money for a confession.  They can't demand that you give them a statement or else lose your government job.

As you also likely know, your private employer can search you without probable cause.  They can come rustle through your office and monitor your e-mails.  They can tell you to confess to your crimes or lose your job.   The Constitution, after all, doesn't regulate private conduct.

What happens when your employer, under threat of indictment, is told to investigate itself and report those findings to the federal government?  I'm not being obtuse or theoretical.  This really matters.

If your employer is a private actor, they can tell you to cooperate with the investigation, or you'll be fired.  They can look through your computer files for incriminating information - warrants be damned.  Your employer can do all sorts of things the government could never get away with.

And thus an important question arises: Should the Constitution apply to the corporation?

This isn't something to flippantly dismiss, especially since clearly-establish law seems to answer it.

If I went with a police officer and beat you up, case law clearly establishes that I can be sued for violating your constitutional rights.  The term of art of "joint action."  When a private person conspires with a government official, the private party acts under color of law. Tower v. Glover, 467 U.S. 914, 920 (1984) ("[A]n otherwise private person acts 'under color of' state law when engaged in a conspiracy with state officials to deprive another of federal rights.").

If this is so, should it be lawful for your employer to tell you to either cooperate with the investigation or be fired?

Even though it would seem clear that the corporation is acting in concert with the federal government,  courts have not held that a corporation conducting an internal investigation acts under color of law.

That's a pretty clever end run around the Constitution, isn't it?  Yet it's all too common.

Tomorrow I'll tell you why this end-run is even more perverse.  If you're especially curious, I'll give you a clue: Computer Associates.

This opinion is pure gold for plaintiffs civil rights lawyers seeking fees under 42 U.S.C. Sec. 1988.  Among many great lines is this:

By and large, the court should defer to the winning lawyer’s professional judgment as to how much time he was required to spend on the case; after all, he won, and might not have, had he been more of a slacker.

Moreno v. City of Sacramento, No. 06-15021 (9th Cir. July 28, 2008) (opinion).  There really is a lot of good stuff in there (including an instruction that district courts must raise billing rates as market conditions change), and anyone who writes fee motions would be prudent to read it.

Gerry Spence on Legal Education and the Bar Exam

Gerry Spence has a post on those subjects here.

Often people who were convicted of crimes never bothered getting those convictions expunged, even when those convictions were eligible for expungement.  Given that no one will ever find out, why go through the hassle?

Given the proliferation of online databases, now might be a good time to clear your record.  There is a already really good database out there (should I link to it?).  It's free and available to the public.  These databases will only get better.  Within the next 3-5 years, the databases will be comprehensive.  If you did something, someone will be able to find out with just a few clicks.

Many states offer self-help guides.  Most lawyers can get your record expunged for under a grand.  There's not much too it.  You don't need to hire Gerry Spence to do it.  The hard part is having been convicted of an offense that is eligible for expungement.

Do it now before it's too late.