The bottom line for parents, as usual, is: Chill out.  Your kid will probably do fine whatever you do.  And even if he does badly, your parenting is unlikely to help.

Two good posts about why looks matter to clients and lawyers and judges and jurors: One, and two.  Unfortunately, looks matter in ways many of us aren't even aware of.

A good friend is a high-powered patent lawyer.  She has decision making power, and a lot of discretion.  She is also young, a racial minority, and is comely.

At a recent CLE, an ugly and condescending white prick behind her in line said, "Um, this is the line for lawyers getting CLE credit."  I guess she didn't look the part.  After all, minority women aren't lawyers!  My friend is much nicer than I am.  She politely corrected him, although I imagine he went to tell his other friends about the "uppity" minority woman he just encountered.

When I asked for the lawyer's name so that I could post it on my blog, thus alerting the entire world to the lawyer's racism (even if it's subconscious), she rebuffed me.  Alas.

One of my favorite blogs.

Why I am a Eugenicist

Can anyone explain to me why it's moral to allow children to be born into family environments like this?

A trio of Louisiana nitwits agreed to swap two young children for a $1500 cockatoo and $175, police charge. The deranged exchange was hatched after Donna Greenwell, a 51-year-old trucker, learned that the bird was being offered for sale by Brandy Romero, 27, and Paul Romero, 46.

It appears as if the children, whose mother is a criminal fugitive, have resided with various families over the past several years, and have spent the past year in the custody of Greenwell, a convicted pedophile with a lengthy rap sheet.

Right.  I'm the hateful one for wanting to protect children from those types of families.  Is that the best you can do?

What an odd world some of you people live in.  You say you care about children, but hyperventilate when some of us suggest that children should not be born into bad families.  How truly and magnificently bizarre and irrational.

The older you get, the less frequency your ears can detect.  That doesn't mean that those frequencies aren't out there; or that others can't perceive them.

Here is an example.  (Hat tip: N.D.)  It produces a sound that most people over 25 years old shouldn't be able to hear.  I have no clue if this particular test is reliable.  (FYI, I'm 31, and I heard the sound with head phones on.)

Still, it's a scientific fact that teens can literally hear things that old people cannot.  Old people will way, "It doesn't exist!"  Well, quite clearly, it does.

There is no objective reality.

It's pretty simple, if you do the right thing - logically and morally.  Eating healthy is expensive.  If we truly care about the poor, we should empower them to make the most healthy eating choices.

First, subsidize vegetables and tax corn.  Make broccoli cheaper than Doritos.  Free fish oil for every family.  Thus, poor people will be able to eat healthily - if they so choose.

Second, refuse to give anyone with a lifestyle illness like Type 2 Diabetes or heart disease, any free medical care.  If you want to eat yourself to death, go for it.  I'll even split the occasional Papa John's pizza with you - yes, we'll have cheese sticks with cheese dipping sauce, too.  Just don't ask me to pay for more than half the cost of the pizza.  Which means: Don't ask me to pay your medical bills.

Today, the incentives are reversed.  Corn is both unhealthy and cheap.  And so, poor people - who don't have the food budget some of us have - eat food that will assuredly kill them.  Obesity is a huge problem in poor communities.  A Big Mac is a lot cheaper - and unhealthier - than chicken breast, broccoli, and olive oil.

How can anyone who is not making efforts to end corn subsidies say he supports the poor?  Of course, that's typical liberalism.  "We just love the poor.  Really.  Now, excuse me while I make this check payable to Big Agra."

Barack Obama got his dog.  It's a spazzy breed for even a dedicated dog owner.  In other words, he picked the wrong breed.

His family's decision was the product of typical liberal/Yuppie/Stuff White People Like self-indulgence.  The dog is so cute!  That's not how you pick a dog.  You need to be more rational than that.

Can you handle a high energy dog?  Even though Obama is a supreme alpha male, he won't have the time to assert his alpha status on the dog.  It will be a regular challenge.  The dog will probably live another 10-12 years.  What will happen to the dog when his kids leave?

In ten years, Obama and his wife will be old.  If they aren't going to live in the country with a lot of space, then what?  They won't be able to properly exercise their dog.  Tossing a tennis ball down your apartment hallway isn't nearly enough for a high-energy dog. 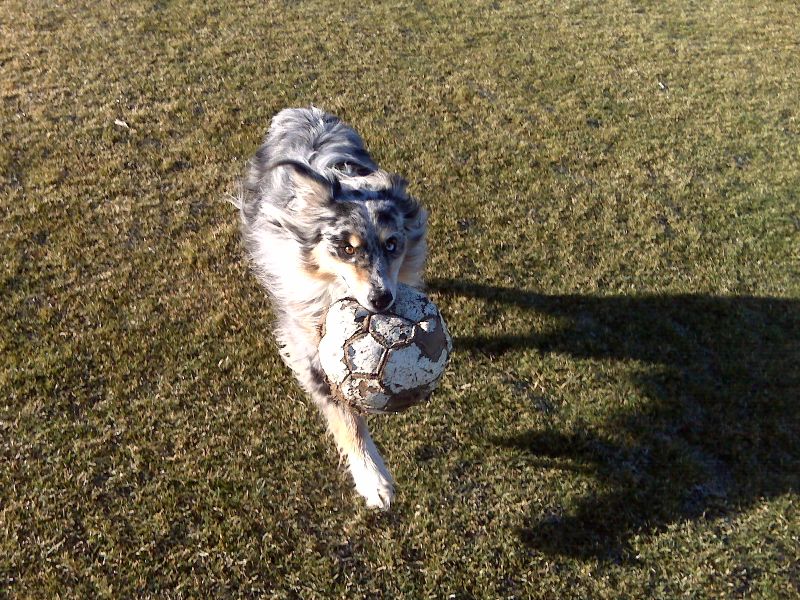 Crime & Federalism's First Dog, Amicus, is an Austrailian shephered.  He already took a trip to the dog park.  He'll get a 3-5 mile walk later tonight.  He'll also have a ball playing session in our front sidewalk.  Will Obama have the time for that?

On days when we're out of the house, he gets a dog walker. He also gets something at night - even if it's just a walk to get coffee, or a short ball-playing session.  No matter how tired I am, my day does not end until my dog has been taken care of.

High-energy dogs require a lot of time and effort.  They are thus the wrong choice for most dog owners.

Incidentally, Obama's dog choice reminded me of the difference between conservatives, liberals, and libertarians.

Conservatives just want to put their beloved - but "dumb" - dogs outside in the yard on a chain.  That's a metaphor for conservatism.  Put a heavy chain on everyone's neck.

Liberals just let their dogs run wild.  This is bad new for the dogs and for other people.  Liberals do not give their dogs the guidance dogs require.  At the dog park, dogs running around, jumping out of control.  They don't listen to commands.  Chaos.  Those dogs end up chewing furniture or running out into the street.

Amicus is the product of perfect libertarianism - Aristotelian libertarianism.  Everyone should be given maximum freedom relevant to the nature of the thing.  The "nature of the thing" is an important step that people gloss over.  A dog has a nature.  That nature is generally to run wild and bite people.  That nature works fine in the wild.  Unfortunately, in civilized society, that part of the dog's nature must be addressed - mitigated, but not destroyed.

My dog is given room to grow, and has an extraordinary amount of freedom.  Yet I recognize his inherently self-destructive nature.

People always say, "You dog can do that?"  Yes, my dog is walked off leash in the city.  I toss tennis balls to him outside of my apartment.  When the ball goes into the street, he stops in his tracks, and looks at me.  "Get me the ball, dumb ass!"  He also is allowed to eat cup cakes, frosting, cheddar cheese, chicken, peanut-butter cups, and other non-traditional dog treats.  He is in perfect health.

If left to his own devices, he'd survive 24 hours in modern society.  He'd either run into the street (as a puppy he was hit by a car); get kidnapped by evil people who steal dogs to sell to animal research facilities; or eat himself to death on chocolate bars.  With proper care, he's allowed to eat a Reese's peanut butter cup without any ill effects, and live an otherwise exciting life.

There is a lesson in here, of course, on governance.  Don't chain people up, but don't let them eat themselves to death, either.  It's a balance, but one that works if you're honest in addressing the nature of the thing being governed.

The FBI considers Ohio (yes, the Ohio in the United States) a "hotbed" of child sex slavery:

COLUMBUS, Ohio—Teenage girls are being locked in the chains of sexual abuse and forced into prostitution—in Ohio.

Two of the cities involved in the rescue are Toledo and Cleveland. Officials said the bust highlights a growing problem.

Every year, 300,000 American children are at risk of becoming sex slaves. So how prevalent is teenage prostitution in Central Ohio and what’s being done to help the victimized girls?

FBI agents are trying to rescue kids who are caught up in prostitution—and Ohio is right in the middle of the investigation.

From the streets in Houston to Cleveland, Operation Cross County uncovered the trend of underage women forced into prostitution.

More here.  Incidentally, Ohio has had plenty of time to pass anti-gay laws.  State and local government has done pretty much nothing to stop the child sex trade.  Because obsessing over what consenting adults do is a greater concern than protecting children from being raped.  Praise Jesus!

At first I felt sorry for the guy.  He got drunk, ate a hot dog, and then stumbled away without paying.  Who hasn't done that?  Then I saw this:

When the officer caught up with Olson, the prosecutor said he didn’t know anything about a hot dog, though he had ketchup and mustard on his shirt, police said.

The officer noted Olson’s speech was slurred and his eyes bloodshot.

The officer told Olson he would arrest him if he didn’t pay for the hot dog, at which time the prosecutor pulled out his wallet and flashed his assistant district attorney badge and cautioned the officer, police said.

He “told me I needed to be careful” and asked if “I was sure that I wanted to do this,” the officer wrote in a report.

If you want to go out and have a good time, leave the badge - and car keys - at home.  I suppose this means you can't flash your badge to people you meet out at the bars.  Such is life.

From the Yet Another Lie We've Been Told Department: No, you don't need to change your oil every 3,000 miles.  "Because everything I was ever told was a lie," indeed.