* "Growing Number of Prosecutions for Videotaping the Police."  The government tells us that we shouldn't concern ourselves with privacy, because only those with something bad to hide need privacy.  Why then does the government prosecute American citizens for simply recording an interaction with police?

* The Beauty Bias surfaces again.  Good-looking people have an easier time finding a job; earn more money; and require less education than their competitors.  Americans - though fat - also hate fat people.  Being fat isn't just bad for your health: It's bad for your wallet.

* The media continues validating my general "check out" strategy - this time by turning a Sarah Palin typo into national news.  When people ask me why I declare America's situation to be hopeless, I have two words: Sarah Palin.  She is not smart.  She does not read.  She does not think.  She is a joke.  Yet conservatives love her, and liberals love to hate her.  That's our future.

* Wall Street gave money to Congressmen on even of financial overhaul [sic] vote.  Why is Rod Blagojevich being prosecuted for bribery?  In a legally-relevant manner, distinguish Blagojevich's conduct from Congress's?  You can't.  Both accepted money for favors.  The only difference is that Blagojevich was caught on tape.

*  AIG defrauded Ohio out of almost $1 billion.  One-billion dollars.  Let me steal $1,000, and I'm going to be a felon.  When Wall Street steals money, it's strictly a civil matter.  It's a great gig - being on Wall Street.  Steal, steal, and steal again.  If you're caught, you personally won't be prosecuted.  You personally won't be required to pay any fines.  Instead, the company - which means shareholders - will be held civilly liable.

It's about time for lynch mobs to begin forming.  Whites used to hang blacks for looking at a white woman.  White men can steal billions from taxpayers, and no one seems to care.  Racism was the greatest invention of the power elite.  A white working stiff has more in common with a black working stiff than either of them have with a Goldman Sachs banker.  Yet whom does the white working stiff hate more - the banker or the black man?

If you are a racist, you are a stooge for the power elite.  At the top of the pyramid, there is no black or white.  It's only money and not-money.

Holocaust survivor dances at concentration camp.  It's amazing what a person can get over when he decides to actually get over it.

Fascinating interview with a fascinating man.  If you haven't ready, watch the documentary about his life - appropriately titled Tyson.

Philosophy is the most importance discipline, because everything you believe results from a philosophical claim.  This is so even with "hard science."  Consider the issue of defining disease.

What is aging?  Really, let's talk about this in a classroom format.  Is aging a natural biological process?  Or is aging a disease?  What is it?

I guarantee that your answer will be based on your moral and aesthetic judgments rather than your scientific judgments.  When you say that someone should "act his age," what does that have to do with science?  That's a value judgment you're making based on a person's behavior relevant to cultural expectations.  How can a man be 40-years-old with no wife and kids?  Well, why do you care?  What does a person's chronological age have to do with the discussion?

If aging is a natural biological process, do we commit the naturalistic fallacy by merely accepting time's wear on our bodies?  Cancer is natural.  Chemotherapy is unnatural.  Losing teeth is natural.  False teeth or dental implants are unnatural.  Thus, we do recognize that some natural processes should be attacked through unnatural means.

Why then accept aging as a natural condition, rather than treating it through the use of drugs?

By making drug use illegal for anti-aging purposes, aren't we making a value judgment about aging?  Isn't it really a moral claim - tautological at best- that, "It's wrong to resist aging."  Or an aesthetic claim that one should, "Grow old gracefully."

Once you realize that philosophy is everywhere, you become less concerned with what a person's claim is; and more concerned for the philosophical basis for the claim.  Why do doctors claim that HGH is an ineffective anti-aging treatment?  Is it because Sylvester Stallone doesn't really exist?  Or is it because the doctors don't want him to exist?

Most of what we hear from mainstream scientists is best understood as science-fiction - though since scientists hide the fictional aspect of their stories, we should call them liars.  For decades have doctors and other scientists claimed that, "Steroids don't work."  Even when the Eastern Europeans were dominating Olympic sports, doctors wrote in their bible - the Physicians Desk Reference - that anabolic steroids do not enhance athletic performance.

Would anyone today agree with that claim, made as late as the early-80s?  If not, then why believe what doctors are claiming today, instead of envisioning what the established truth will be tomorrow?  Today's lie that will be tomorrow's truth is human growth hormone (HGH).

Doctors today claim that human growth hormone "doesn't work."  Here is what the respected (not by me) Mayo Clinic writes about HGH:

Studies of healthy adults taking human growth hormone are limited. Although it appears that human growth hormone injections can increase muscle mass and reduce the amount of body fat in healthy older adults, the increase in muscle doesn't translate into increased strength. In fact, researchers have found that strength training is a cheaper, more effective way to increase muscle mass and strength.

It's not always obvious to laypersons, but to understand science, you must understand morality.  Mayo is not making scientific claims.  It is making moral judgments.  Read this line, for example:

Well, why not?  It is a scientific fact - that needs no explanation to any many over 40 - that levels of human growth hormone and testosterone decline with age.  Isn't that a bad thing?

No.  Scientists have made the aesthetic and moral judgment that "growing old" is "natural."  This is the naturalistic fallacy.  Not everything that is natural is good.  Cancer is natural.  Chemotherapy is unnatural.   If you get cancer, do you just die?

Yet because scientists have made the value judgment that growing old - which means slowing decaying until physical weakness and dementia set in - they denigrate HGH.  They denigrate by first lying about its effectiveness.  They also denigrate HGH by labelling natural-and-expected effects as side effects.

HGH leads to increased muscle mass, less fat mass, and stronger bones and joints.  Indeed, one "side effect" to HGH use is joint pain.  Your hands and shoulders hurt for a few months, because your body is generating more cartilage.  Thus, the joint pain is not a side effect, but rather is the natural "growing pains" one should expect when generating new tissue.

Yet the lies will persist.  People will attempt to argue with me, by citing the Mayo Clinic.  (I no longer argue with anyone about anything unless they can prove they've conducted 20 hours of independent research. )

Whatever one's aesthetic viewpoint, consider this: Stallone does not look like this because of whey protein and egg white omelettes.  Instead, he's using the same stuff that mainstream doctors claim "doesn't work," or has too many "side effects." 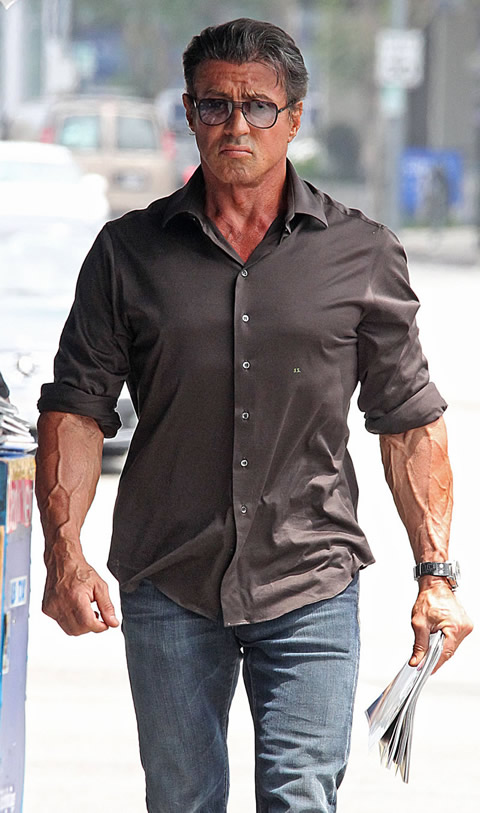 Watching the News is Way Worse than I-Dosing

The TV hasn't been on in months, and there shouldn't even be one in my apartment.  This is one of many reasons why one must never watch television - especially "news":

That video is not satire.  It's not a joke site - or at least not to the news producers.  It's not from The Onion.  While a glaring example of stupidity, almost everything you see on television is but one degree of separation away.  (Via Radley Balko.)

Both Democrats and Republicans took bribes from subprime fraud, Countrywide:

Chris Dodd - the chief author of financial reform [sic] - is retiring from the Senate because of his accepting bribes.  Why isn't he heading to prison?  (And why does anything think someone who accepted bribes from Wall Street, and who is going to start lobbying for Wall Street, would enact a legitimate reform of Wall Street?)

In related news: Minutes before the financial regulation votes had been cast, Democrats and Republicans were taking bribes from Wall Street.

A controversial investigation by the Office of Congressional Ethics into fundraising by eight lawmakers prior to the House vote on financial services reform is continuing, but whether the ethics committee will launch a full-scale probe is still far from clear.

The bribery is so common, that Congressmen couldn't function without it:

“There are things going to the floor every day,” said Representative Melvin Watt, the North Carolina Democrat who is also a subject of the inquiry. “If this is going to be the rule, you can never do fund-raising.”

* The Middle Class has always been boring.  See Class.  It's thus unsurprising that they aren't having sex.  Boring is another word for stable, however, and thus Wall Street's destruction of the Middle Class means more instability.

* Who would imagine that someone earning six figures should receive overtime protection? Aren't overtime laws designed to protect low-wage workers? The plaintiffs' lawyers who filed this lawsuit are visionaries, and I am jealous.

* "Facts, they found, were not curing misinformation. Like an underpowered antibiotic, facts could actually make misinformation even stronger."

* So many angles in this article about an unemployed college grad who turned down a $40,000 job; and thus the comments section is much more interesting than the article itself.

Months ago an online dispute arouse between two people - slave masters and slave revolters.  Though not a homeowner, I advocated strategic default - walking away from an below water mortgage that you can afford to pay.  People like Megan McArdle (herself a welfare queen) argued in favor of slave masters: Pay your debts, plebeians!  It's your duty.

What do the rich - the same people who work at banks and on Wall Street and who were themselves bailed out by Americans- do when living in an underwater home?  They live as slave masters:

The housing bust that began among the working class in remote subdivisions and quickly progressed to the suburban middle class is striking the upper class in privileged enclaves like this one in Silicon Valley.

Whether it is their residence, a second home or a house bought as an investment, the rich have stopped paying the mortgage at a rate that greatly exceeds the rest of the population.

The rich have no morality:

The CoreLogic data suggest that the rich do not seem to have concerns about the civic good uppermost in their mind, especially when it comes to investment and second homes.

That is old news, to anyone who knows the rich.  Yet the rich - through corporate-owned media organizations - nevertheless demand that the poor and middle class live by a separate set of rules.  If you cannot understand that your entire moral system is based upon your enslavement, and was written by your oppressors, then you deserve your chains.