Men Have Lost Their Gameness

"It's not my dog I'm worried about," I told the guy whose two German Shepherds were harassing my 44-pound Aussie. He gave me a condescending smirk - the kind of smirk that in a more civilized era would have authorized me to smash his head against a nearby tree. Thirty seconds later, his dogs were yelping.

Amicus licks ice cream from a child's hand, and doesn't bark at people. One friend called him the mayor of San Francisco, as he's widely-recognized and adored. You cannot leave the house for a 10 minute walk without being stopped at least three times. He's acts like a prima donna.

Josh Duhamel and Fergie saw us hiking in Hollywood, and asked us to call him over. "We want a dog who looks like that. Can we meet him?" I called him over, but Amicus laughed, preferring the solace of shade, saying, "You come to me." When unprovoked, he is gentle. At the dog park, he goes beta, rolling on his back and revealing his jugular. If another dog - large or small - runs after the ball I toss for him, he stops the chase. He is the most low-drama, coolest dog you'll meet. Unless you fuck with him.

He has two trigger points. No one gets to hover over him. When other dogs try humping him, he steps away kindly. Then she shows his teeth. Then he shows him gameness.

My ex was leaving her friend's house when a street person quickly approached her. Amicus immediately went after the would-be rapist, and then taught my ex a lesson.

"The homeless person quickly backed away, and I pulled Amicus away. But then Amicus went right back after the guy!"

In a three words, she captures what it means to be game. "He went back."

They say a man shouldn't get in between two dogs fighting, but I've done so at least a dozen times. I have to, as the only way to get Amicus to stop fighting is to pick up him and carry him away. If you pull him apart, he goes back. He always goes back.

My good friend has the kind of dog you see advertised in the Robb Report. When they met, this beast insisted on hovering over Amicus. We pulled the dogs apart. Then Amicus jumped away from me, and went back for more.

Objectively speaking, Amicus' move was stupid. There is no question my friend's dog would have mauled Amicus. Yet a game animal simply doesn't care. There's a dog in your face, you tried avoiding the conflict, and the dog is still there. It's time to move, and whatever happens, happens.

How many guys do you know who are game? You go to the club, and a guy almost cires himself to sleep because a girl won't talk to him. He gets rejected once, and he's done.

When men complain about not being able to meet women, I wonder how many times they actually go back for more, not giving a fuck about blows to their egos.

Regular readers will know that Joseph Rakofsky, who filed a frivolous lawsuit against me and about 80 other people, has been looking for love. He may have found his soul mate in Kristan Peters-Hamlin, who is threatening to sue lawyer Ted Frank for his truthful reporting of disciplinary proceedings that are proceeding against her. Frank has the details here.

What you people need to realize is this: Most Americans are forgiving. We've all made mistakes. The nation's religion is based on redemption. The best way to have your mistakes forgotten is to apologize and move on.

Also, I have to wonder how moronic or full of themselves these lawyers must be. Do you have any idea how most law bloggers earn their money? It's not from winning Miss Congeniality contests.

This might be the best street fight video on the Internet:

Hermon Raju: "I can honestly say I feel raped by the Internet."

This video will be tramuatic to many. It's instructive, however, in the dangers of hesitating in the face of danger.

A picnic turned tragic for a family of five when a torrential wave caused by heavy rain swept them away at a waterfall in Patalpani in Indore.

While two of the family managed to swim to safety, three others including 22-year-old cousins Chhavi and Modita and Modita's father Chandrashekhar drowned to death as the wave swept them away while they were enjoying at a waterfall in Patalpani.

Yep, we still have both in the United States.  Any man who marries a woman who earns less than he does is risks his life and his freedom.  The divorce rate is 50%, and women file for divorce 70% of the time.  Why wouldn't a woman file for divorce, given that it's like winning the lottery?

It's also the case that no male should fight for any feminist movement.  Despite the lies, American males are the oppressed class.  Feminism is not about equal rights.  Feminism's sole goal is the destruction and domination of men.

Under a feminist regime, men who are falsely accused of rape are expelled from college; and women who file for divorce receive a lifetime annuity for simply having married some chump.

Hugo Schwyzer: Alpha of the Century

For years I've followed the work of Hugo Schwyzer, and man is he a piece of work. Many guys hate Schwyzer, because Schwyzer is a feminist. I have long had a man-crush of Schwyzer, as he can do what I am incapable of doing.

I am able to hurt people, but only once they've hurt me. I do not throw the first punch, but I throw the hardest ones. I'm simply physiologically incapable of exploiting others. I have turned down sex with girls because I knew they'd love me, and I didn't want to hurt them. Gross and beta, right?

Hugo, however, is the man. He had sex with his students:

In the fall of 1996, I was 29. Three years into my teaching career, my reputation as an energetic lecturer was quickly being eclipsed by rumors of my sleeping with students. Most of the rumors were true. I was reckless to the point of stupidity, showing little interest in protecting the job I loved. I was trying to get sober and failing. I stashed drugs in the same file cabinets that held student papers, gave lectures with booze in my bloodstream. I had sex with students on my office desk.

Ballin'. Now, I will use my status if it impresses women - out in the streets. I wouldn't have sex with students or women I supervise, since a student is a subordinate. The power relationship is fucked up. You simply do not fuck your students. Or at least I don't. Then again, we've already established that I'm weak.

Speaking of weak, do you know what I tell women about marriage? I tell them that marriage is a sham, human beings fall out of love after 2.5-4 years, and that while they should enjoy their time with me, they should also be looking for a marriage-minded beta male who will take care of and support them. The truth has cost me a lot of sex.

Hugo, on the other hand, is on his fourth marriage. He has stood up on the altar with four different women, promising each of them a lifetime of devotion. And the guy is only in his mid-40's. I will also wager, although he hasn't written about this much, that each of those women supported him.

He has admitted to being a drug user and "dead beat," so it's highly unlikely he paid his own bills. He thus had women writing checks for him. Awesome!

Did he offer to support his potential child, perhaps by writing checks for child support? Did he offer the child emotional support? Hahahaha! No. He's an alpha.

He let some other man raise his potential child. He then walked away.

Hugo Schwyzer, you are the Alpha Male of the Century. Congratulations. 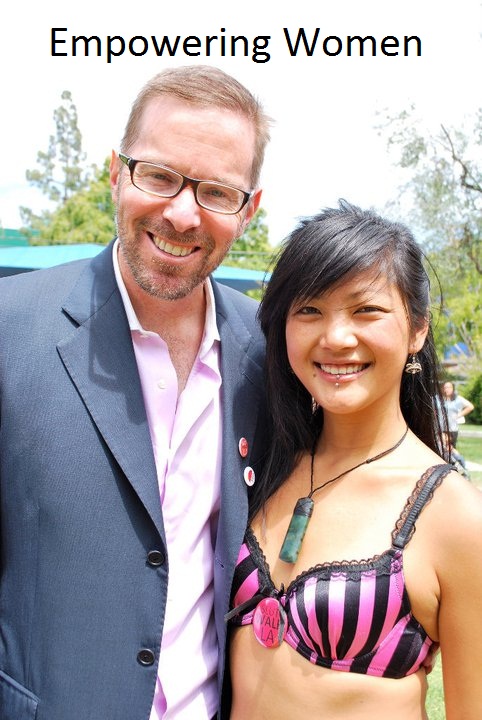