About that Time I was Falsely Accused of Making a Rape Threat...

I'm a controversial fellow who posts mean Tweets online. I get a lot of heat, and much of it is deserved. In fact, if you said you viewed me as the biggest asshole online, I'd be OK with that.

Unfortunately people have gone beyond calling me out and instead have been falsely accusing me of making rape threats online.

Background: Why was I falsely accused of making a rape threat?

A few months ago I attracted a large hate mob for my support of the First Amendment. I was able to obtain court records showing a woman abused the court system (even lying under oath) in order to obtain an unconstitutional restraining order.

As regular readers of Crime & Federalism know, I have often ordered court records out of my pocket to expose abuse of legal processes. I even had to pay a considerable legal bill after being sued for defamation by Joseph Rakofsky. (I and my co-defendants won that case.)

A group of oddballs who call themselves social justice warriors (SJWs) were not used to such scrunity. They began an online assault. I was doxed (my home address as well as pictures of my home were posted online), the police were called on me, and multiple frivolous reports to the State Bar were made.

That wasn't enough. I also had to be falsely accused of a rape.

One SJW named Randi Harper became obsessed with me. She called me "creepy" for writing posts about my enjoyment of sex.

If I understand one subject well, it's women. I also understand projection. When people cast aspersions over you for your enjoyment of an activity, chances are the person enjoys the same activity.

I went through Randi Harper's archived blog (the Internet never forgets) and immediately had my suspicions confirmed.

Ms. Harper was a sub. She enjoyed being tied up. I even found a picture of her wearing a dog collar.

That's totally cool, by the way. Everyone has his or her kink, and as long as your kink involves consenting adults, it's none of my business.

I taunted Ms. Harper a bit, as I do. (Yes, I can be an asshole sometimes.)

Her reaction, however, surprised me.

Rather than accusing me of being a misogynist or slut shamer, she falsely accused me of making rape threats.

You can see my original Tweet. In what world is this a rape threat? 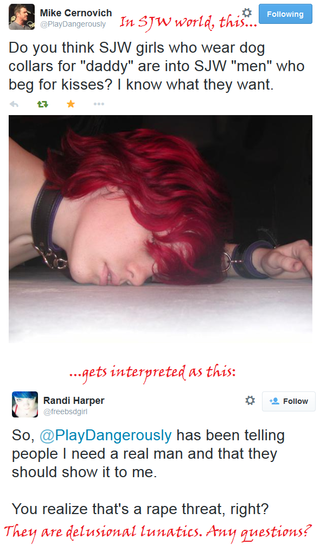 She continues to repeat the lie, which makes her seem desperate for me. 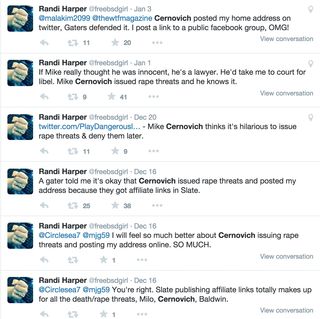 (I never posted her current home address. I found a "police blotter" article from ten years ago, when Ms. Harper lived in another state, confirming Harper had been in jail.)

Where are my white knights?

There are men who go online to fight Internet harassment. They claim it's not because they want to impress women.

No, these men just really don't like cyber harassment, and they are going to fight it.

How many men have called out Ms. Harper for making an accusation that not only harms me, but also harms legitimate rape victims by trivializing a serious crime?

No one called her out for making a verifiably false accusation. Ms. Harper has refused to apologize, and seems to think I should spend tens of thousands of dollars suing someone with multiple tax liens rather than write this article.

The  accusations against me are verifiably false.

Fortunately I have multiple web platforms to combat the accusations.

What about the poor schlub who isn't a master of public relations? What can innocent victims of Ms. Harper's conduct do?

What about rape victims who aren't believed because women like Ms. Harper lie about rape?

What about men who are actually arrested and jailed for false rape accusations?

Everyone is all about that call-out culture, but when a woman falsely accuses a man of making rape threats, no one seems to care.

Incidentally, there is a hilarious post-script to this story.

Ms. Harper has started a non-profit organization with the stated goal of fighting Internet harassment and cyberbullying.

Apparently falsely accusing a man of one of the most heinous crimes imaginable doesn't count as "harassment" or "cyberbullying" to the radical left.

The radical left throws around rape accusations like a football at a Sunday BBQ.

That these false accusations harm actual rape victims, who are less likely to be believed now that rape has no meaning, doesn't seem to deter people from making these accusations.

Adam Fisher: A Portrait of an SJW as a Lying Young Man

You must never believe the word of social activists calling themselves SJWs (short for social justice warriors) as they appear to have a defect causing them to lie about everything. How bad do they lie?

They lie even about even trivial matters.

It really is something to behold.

Here's an example of an SJW lying.

A person posted a quote of mine onto his Facebook. He tagged me in his status update.

Someone guy named Adam Fisher, who I had never heard of, immediately posted a link to an article critical of me.

I responded to Mr. Fisher's post, laughing at him for being offended by Tweets. (Mike Cernovich, "Twitter Conduct.")

Mr. Fisher replied by saying he had no ill will towards me and did not want to talk to me. He replied three times in a row to tell me how he really doesn't care about me at all! 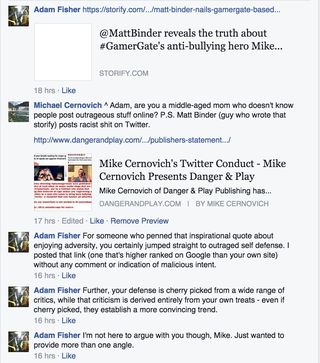 I responded to him and then he replied to to me again.

"apparently #gamergate has leaked over into my real life because cernovich is literally yelling at me on his personal FB acct."

First of all, Facebook is not real life. Mr. Fisher is implying that I knocked on his door or have done something to harass him. How can I "literally yell" at someone online?

I had never heard of Mr. Fisher, although he clearly had heard of me. Yet he lied in his earlier Facebook post, claiming "I posted that link without any comment or indication of malicious intent."

Mr. Fisher does not like me, and that's totally cool. I can respect people who are honest about why they do not like me. That's integrity.

What sort of man lies about his motivations? Why not simply say, "I think Mike is an asshole. Here's why."

Integrity is in short supply these days.

This is all trivial beyond measure, and that's why I bring it up.

SJWs have zero integrity. Even when it comes to trivial nonsense like this, they will lie.

Never, ever believe an SJW about anything.