An Open Letter to the #Cuckservative Chattering Class

I'm not a political junkie who sits around watching CNN or FoxNews. I don't know who the big names or personalities are, and I don't care. For the most part politics are reality TV for men - part wish fulfillment, part distraction from a life of quiet desperation.

Yet unfortunately my own freedom and survival have required me to seek change. This is annoying to me, but unless the cuckservative (members of the right who enjoy watching people like me get screwed over by the radical left) take a stand, they may as well get used to having me around.

Cuckservatives haven't left me many options. Here are my choices:

Sitting back silently is never going to work. I'll always have something to say, which means I could play nice.

Playing nicely hasn't worked. Not a single member of a Republican-controlled Congress spoke out in favor of due process during a hearing discussing the college campus rape "crisis." College men are about to see their rights curtailed. What have Republicans done? Watched.

When Gawker attacked me, Reason.com joined in the dog pile. Without contacting me or reaching out, a Reason blogger put me on blast for my "mean Tweets." Reason, a "libertarian" publication, is part of the same call-out culture and plays by the same rules of social justice "journalism" as Gawker. No, I won't play nicely with such people.

This leaves option three, which is to to put cuckservatives on blast.

I almost feel bad for the cuckservative who have recently discovered me, they aren't aware of what they have gotten themselves into.

As a lawyer who has been sued for defamation (and won), lawsuit threats make me LOL. I know where the line between free speech and defamation lies, and yes I know all about anti-SLAPP laws. Your legal threats mean nothing.

I also have more energy than the cuckservative, as I live a healthy lifestyle, go to the gym, and understand the power of mindset. Your personal attacks or attempts at manipulation mean nothing.

You deserve no mercy. You would watch as men go to prison on false rape convictions. Do you think I won't reveal your affairs and other indiscretions out a sense of kindness or decency?

I don't merely write about policy issues. I write about individual people. If you're living a lie, it will be exposed.

If you fancy yourself a celebrity or personality, my advice would be to start having our backs. At the very least, be careful when running your mouths. If you ask for my attention by calling everyone who uses the #cuckservative hashtag a racist or anti-Semite, don't complain when you get my full attention.

You can keep attacking us or calling us racists. You can keep reaching out to the same protesters who disrupted a Bernie Sanders political rally, because hey - you surely have more credibility with the #BlackLivesMatter crowd than Bernie, and your outreach will be highly successful.

What are my demands?

Maybe others need more, but that's all I need.

I know you won't listen, as you're fat and bloated like all members of the establishment.

Just don't say you weren't warned. Don't cry when I reveal embarrassing facts about you.

The stakes are too high for me to say anything other than, "Cry more."

How to Argue with a Cuckservative

Ever since I started making fun of cuckservatives (conservatives who enjoy watching their friends get screwed over by the left), the attacks have come. The attacks are not from social justice warriors (my usual adversaries). No, I've been attacked by people on the right! 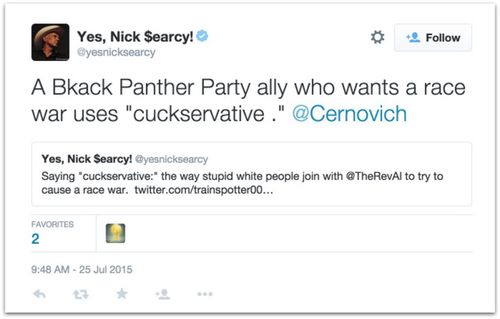 The attacks from various cuckservatives are meta-commentary on the nature of the cuck. Never once has Nick Searcy or Kurt Schlichter (had to Google him) reached out to me in friendship. Instead they attack me on Twitter, in public, to status signal they are good boys who "didn't do nuffin."

Their arguments are trite and easily defeated.

When cucks attack you, always reframe the issue.

"You are a white nationalist!"

I believe in America. I'm an American. If this makes me a nationalist, then yes I'm a nationalist. I also happen to be white.

Why don't you believe in America?

"Your allies are racist!"

My "racist" friends troll the Internet. The left's racist friends demand an audience with presidential candidates.

Moreover, Bill Ayers is a terrorist.

Tell me again why we need to talk about my "raciss" friends.

You care more about whites who vote as a bloc than you do about the left's use of racial identity politics. This is why you lose elections.

Cucks have no argument other than shame. They have no intellectual framework.

Never get sucked into their frame by defending your position. Cucks are not intellectuals. They are timid girly-men who live in fear of being shamed by the radical left.

Salon, a far-left website, recently joined in the dog pile, calling people like me who use the work cuckservative raciss.

Do not engage in serious discussions with them about the issues.

Yes, we have intellectual arguments. We could tell them a country is not based on lines on a map. A country is the people who live on the soil.

America is great because the Americans who build America are great. If we want to make America great again, we need to screen who we allow into the country our grandparents built.

We could explain that every race and ethnicity except whites engage in identity politics. Claiming whites cannot form voting blocs based on race is itself racist.

We could painstakingly explain that Republicans win elections when whites - as every other race and ethnic group does - vote as a bloc. See, "The Case of the Missing White Voter."

We could ask them why it's worth risking alienating millions of white voters to skim off a few hundred thousand black voters. We could ask them to show us their data and projections explaining their position. Do conservatives want to win elections or get nice articles written about them in Salon?

But they do not have any response, as they live in fear of being shamed by the radical left, and they assume you too are driven by a fear of shame.

Always change the frame. If they attack a misfit on your side, ask them why they care more about your friends than about their supposed enemies on the left.

Quite frankly, there's no one using the #cuckservative hashtag who is a worse person than Al Sharpton or Bill Ayers.

As someone on Twitter put it, "Our 'racists' are on Twitter. The left's racists are in the halls of Congress and on television."

Why then are conservatives more worried about a few trolls on Twitter than issues that matter?

That, my friends, is a question that answers itself. #cuckservative