Is Devin McCahey Going to Shoot Up Iowa State University

Devin McCahey is a student at Iowa State University. Yesterday on Twitter he told me:

straight white people literally like ur an abomination and don't deserve the same rights as others. Be grateful we aren't just killing you. 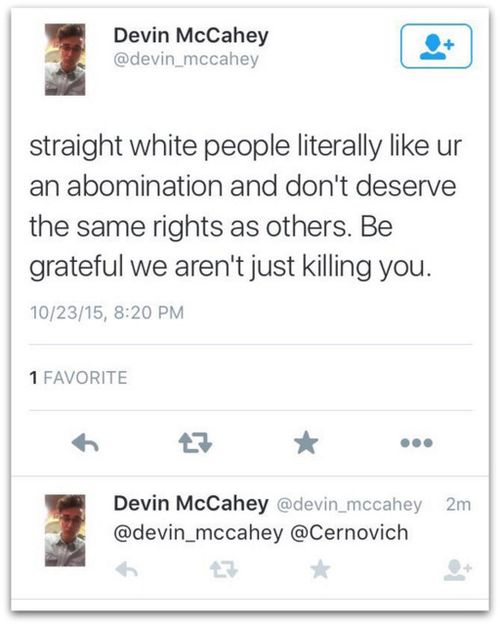 Although I do not read that Tweet as a death threat, it is striking to me in its anger and hate and perhaps mental instability.

"Be grateful we aren't just killing you."

No, I won't be grateful you aren't killing me and other straight people, Mr. McCahey.

I hope Iowa State University police officials look into this matter immediately, as this is the type of stuff a school shooter would say.

Everyone from Salon to Twitter to National Review are defending pedophiles.

Salon published a lengthy article from an admitted pedophile. In this article the pedophile, who has worked around children and admitted in chat rooms to hugging children closely, shared his tale of woe.

I’ve been stuck with the most unfortunate of sexual orientations, a preference for a group of people who are legally, morally and psychologically unable to reciprocate my feelings and desires. It’s a curse of the first order, a completely unworkable sexuality, and it’s mine. Who am I? Nice to meet you. My name is Todd Nickerson, and I’m a pedophile.

Rather than treat pedophilia as a grave moral wrong, pedophilia is treated as an innate sexual identity. Pedophiles are no different from gays, the author of the Salon article wrote, and thus deserve civil rights.

While Cooke did not give child rapists a full throttled defense, his article gave moral authority and cover to Salon. Pedophiles, Cooke argued, should not be forced to remain in the closet.

With regard to angry respondents to my article, the greatest amount of flak has come from the far right, who smeared Salon for daring to allow me to speak, as if silencing pedophiles somehow equates to fighting sexual abuse.

Read, "I’m a pedophile, you’re the monsters: My week inside the vile right-wing hate machine."

Notice the use of the language. Silencing.

Anyone who speaks out against pedophiles is bigot spreading hate speech in an effort to silence those who would have sex with children - if only the laws were changed legalizing the practice.

Sarah Nyberg (formerly known as Nicolas) is a prominent social justice warrior and Twitter user. Leaked chat logs revealed Nyberg was something else - she/he was a confessed pedophile.

LEOPirate, the user who exposed pedophile Sarah/Nicholas Nyberg, was suspended from Twitter.

Twitter allows an admitted pedophile to use its service while suspending the account of the person who exposed the pedophile.

After Sarah Nyberg was exposed as a pedophile, dozens of social justice warriors rallied to her cause. Jef Rouner, a writer for the Houston Press and Cracked.com, sent a picture of his child to Nyberg to "cheer her up." 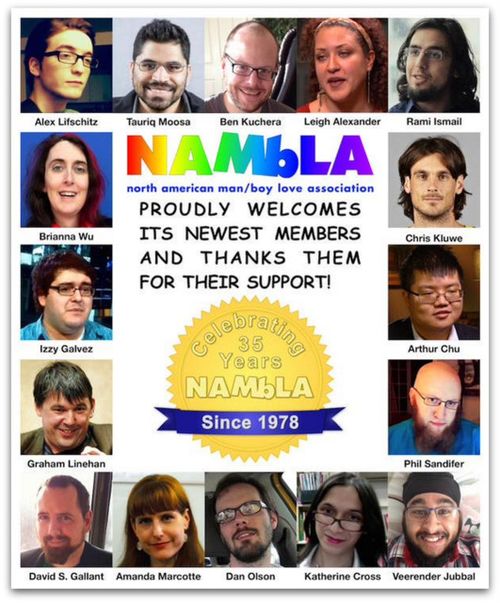 Today Yahoo! has published an article from a mother who intends to dress her 9-year-old child up like a sexual object to be put on display:

It’s Halloween season again. So far, my nine-year-old daughter with heavy tween tendencies has wanted to be a broken porcelain doll, a Cheshire Cat girl, and a Galaxy Cat. I’m rooting for the Cheshire Cat girl, personally. All of these costumes will likely involve either a short skirt or dress-over leggings, or just leggings and a shirt (that’s the Galaxy Cat).

Will the National Review staff swap pictures of the little girl in her costume?

Or will the right grow some balls and take a stand against pedophilia?