A Day in the Life of an Anti-Drug Zealot

He woke up at his usual time of 6 a.m., rubbed his eyes, and brewed a pot of coffee.  "Man, I'd be finished without this stuff," he chuckled to himself.

After a hectic morning, he decided on a two martini lunch: "It's to calm the nerves," he said to the wide-eyed waitress.

Finished with work, he heads home, where he enjoys a thick steak, salted baked-potato, and creme brulee.

For his post-dinner pleasure, he winds down with a good book, a courvoisier and a Cohiba his friend snuck in after vacationing in the Dominican Republic.

At around 9 p.m. he popped a little blue pill, since things haven't worked the same since he turned 50.

Afterwards, he and his wife are watching the evening news when a headline flashes at the bottom of the screen.  "BREAKING STORY: Man caught with 50 kilos of marijuana arrested."

"Thank God," he says to his wife, "that the police are keeping these dope pushers off the streets."

Your Face on Meth

Wow -- here is a web site showing what people looked like before, and then after, they became meth heads.

How to Cross-Examine your Lawyer

Inc. Magazine has an article entitled "Learn to Love Your Lawyer" that teaches clients how to select and manage an attorney.  I especially enjoyed this segemet of the article:

Savvy legal consumers ask questions -- lots of them. If you're interviewing a litigator, ask how many jury verdicts he has won (himself, not a colleague or the firm in general) in the same area of law, and in the same courthouse. If the answer comes back "plenty," ask for a list of those cases with the names and telephone numbers of references. There's no better way to smoke out litigators whose actual experience consists of carrying the bags for a more senior partner at a two-hour witness deposition four years ago. The same goes for business lawyers. When a mergers-and-acquisitions partner confidently ticks off the half-dozen deals she and her firm have done in your industry, call a time-out. In which deals did this lawyer (not someone else in her firm) serve as lead counsel, not just as a bit player? "Nobody asks these questions," says Fred Bartlit, a Chicago litigator who often works with entrepreneurs.

That's very sound advice for clients, and for others looking for the truth.
(Via MyShingle)

Sandefur Gets It Right

Writing about his trip to San Francisco, Tim Sandefur notes:

San Francisco is alive. I consider it proof, by the way, that liberalism is better than conservatism. No sane person would prefer to live in Salt Lake City than San Francisco, notwithstanding the socialism.

My wife and I lived in San Francisco last summer (on California & Hyde). It was the best summer of our combined 51 years on this earth. Living centrally in the city, each weekend we'd close our eyes and pick a direction on the map. Then we'd walk.

That's the beauty of the city. You can find something wonderful in any direction - whether it's watching the crowds at the Pier, enjoying the shops in Union Squre, or merely enjoying the exercise of walking through the hilly city. Hell, the homeless people were even such a part of the landscape that we weren't annoyed with them. But San Francisco is not the place for people who have sticks up their arses, or who can't mind their own business.

Each time we walked down Polk Street, we'd smell marijuana in the air. We'd see same-sex couples carrying bags with logos from such-and-such lube shop. We never minded because, quite frankly, it's none of our business if you are smoking marijuana or having sex. However, the city does have somewhat of a degenerate element to it.

My best friend stayed with us on the 4th of July weekend. We watched the fireworks at the Pier and then went to some bars. On the way to one bar we saw a homeless man peeing on the sidewalk (talk about the plain-view doctrine!); I stepped in human fecal matter; and a girl at the bar flashed us - all within about 20 minutes. After being flashed I laughed, looked over to my friend and said, "In twenty minutes you have seen the soul of San Francisco."  And of course, per capita, citizens of San Francisco consume more beer and books than anyplace else in the United States.

Hey, the city might not be for everybody. But as for me, give me San Francisco, or give me...well not death, but everywhere outside of SF does seems a bit lifeless.

UPDATE: I just found this blog (Via the Legal Reader) whose focus in on San Francisco. How cool is that?

No Effin' Around here

The soon-to-be-legendary voicemail is here.

Spyware
Everyone should have a spyware detector and killer on his or her machine. I run Spybot Search & Destroy after every internet session. You can download it for free here. And you don't have to take my word for it: PC Magazine gave it high marks.

BugMeNot
I am not quite sure how to describe BugMeNot but I can state what they do. They provide you with a usable login and password for various sites that require registration. Thus, I suppose, they're a password provider. I don't think it's stealing because the sites they provide logins for will give you free registration. (Some might argue that the website provides you free content in exchange for your personal information. Thus, you are being dishonest by providing someone else's - or a phoney - login and password.) Anyhow, it's a great service for you privacy buffs. (Hat tip: TechLaw).

Soople
If you are not using Soople, you should be. (Unless, of course, you already know all of the handy dandy Google prompts, e.g., to find everything about Professor Yin at the University of Iowa's website, you would type: Yin site:uiowa.edu ; if you want to find his co-blogger's profile, you would type Heller site:uga.egu). Anyhow, most people do not fully use Google.  Soople thus creates a new division in America - those who use Google fully, and plebian scum.

A previous post on cool e-stuff can be found here.

I learned from reading this report (thank you People for the American Way) that when I joined the Federalist Society, I became a right-wing whacko.

Well, my fears were realized.  I recently learned the former Solictor General owns two Australian Shepherds.  I too, own an aussie (pictured below).

You heard it here first folks.  The Federalist Society (much like Grisham's The Firm) is so cultish that everything its members do is coordinated.  I no longer have a choice in which breed of dog I own.  And I thought having them pre-screen my wife was intrusive! 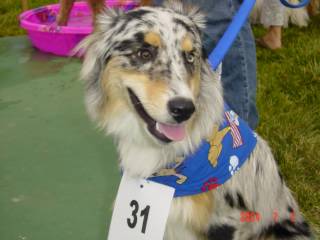 Anyhow, the guy pictured above is Amicus.  I was going to name him Bivens, but my buddy was too little to represent Bivens, the German Shepherd of civil rights cases. (In Bivens the Court held that the Constitution implied certain lawsuits against federal government agents).  I also wanted to name him Brennan, since he's a happy and extraordinarily friendly pup.  However, the guys (all white males directly descended from slaveowners) at Federalist Society Headquarters said this might make people think I am a left-wing liberal.  They also said I should not name my dog after an activist judge.  They were right.  Vow No. 2 of the Secret Order of the Federalist Society reads: "No member of the Federalist Society shall cite or refer to made-up law or the authors of made-up law, in any context or under any circumstances."  Well, since I'm no longer allowed to think for myself, I settled for Amicus.

UPDATE: CrimLaw discusses his experience with the Cabal.  I don't see any pictures of his dogs, however.

When the undersigned accepted the appointment from the President of the United States of the position now held, he was ready to face the daily practice of law in federal courts with presumably competent lawyers.  No one warned the undersigned that in many instances his responsibility would be the same as a person who supervised kindergarden.  Frankly, the undersigned would guess the lawyers in this case did not attend kindergarden as they never learned the get along with others.

Unfortunately I only answered Questions 9 & 10 of this quiz correctly. Perhaps you can do better.  (Hat tip: MAGISlaw.com)