Even Barack Obama gets sucked in:

(Via, What About Clients?)

Obama's Alphaness in All Its Glory

Can anyone imagine George W. Bush doing this:

The high-flying execs at Citigroup caved under pressure from President Obama and decided today to abandon plans for a luxurious new $50 million corporate jet from France.

Suck it, conservative betas.  Go cry yourselves to sleep.  Leave the real work for the alphas of the world.

Will conservative "thinkers" praise Obama for his actions?  I'm a libertarian who did not vote for Obama.  Intellectual integrity requires that one praise those who do right - even when those who do right are one's ideological opponents.

Can Charisma Be Learned?

The Boston Herald explores whether charisma can be learned.  I've met many powerful and rich people.  Only two were charismatics - Arnold Schwarzengger and Gerry Spence.  Everyone I know who has met Bill Clinton have noted his charisma.

People who have charisma are few because they are alpha males who love you.

If Gerry Spence were an asshole, he'd be just another prick multi-millionaire.  He is able to suck people in because he is so vulnerable.  Bill Clinton, as President of the United States, would feel your pain.  General George S. Patton, kill though he was, was known for his love of his soldiers.  Let the other poor bastard die for his country.

Watch Arnold Schwarzenegger pose with others.  He always directs the attention to whomever he is with.  Why?  Because that empowers the beta (and if you're in a picture with Arnold, you're the beta).  Plus, it exuded confidences.  I am so large that I don't need to direct your attention my way.  Moreover, by directing attention to someone else, you establish yourself as the alpha - or else your directions would be ignored.

A Yale English professor has theorized:

What people are responding to in charismatics, Roach writes, "is the power of apparently effortless embodiment of contradictory qualities simultaneously: strength and vulnerability, innocence and experience, and singularity and typicality among them."

In other words, no one follows a beta - because a beta has nothing to offer other than a shoulder to cry on.  Someone who is too alpha is someone to fear.  Spence himself said that he lost trials because he would too aggressively go after witnesses.  Once he perfected the soft-cross (which is based on the love even of one's adversaries), he never lost a case.

Thus, a charistmatic must possess great strength while offering love. 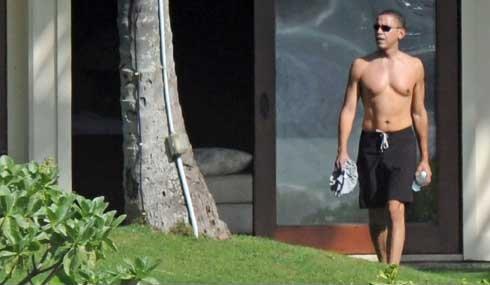 During the election, conservatives were talking about how "manly" John McCain was.  Those same people worshiped George Bush's "manliness," too.  Give me a break.  Anyone who is not a beta can clearly see that Obama is way more alpha than Bush or McCain.  I just watched a couple of videos that provide concrete proof.

In this clip, he talks about why he wants to keep his Blackberry.  I will translate for the betas: "I need my Blackberry because I ain't nobody's bitch.  I'll get my own information and think for myself, so if you think you're going to play me, get over that shit right now."  Bush and McCain are both morons who would gladly let others tell them what to think.  Not thinking for yourself is beta.

In this clip, he explains that he does not want a "yappy" dog.  White yappy dogs are like anti-matter to alphas.  Bush or McCain wouldn't care what kind of dogs they'd have, because they are betas.  Or they would overcompensate by getting a Great Dane or other large show dog.  A real alpha gets a strong dog, without overcompensating.

Obama is going to do big things.  Whether those things are things I agree with doesn't change his alpha status.  He's so freaking alpha is oozes from his pores.  If you cannot see this, you are beta and are not even allowed to discuss these issues.

Obama Reminds World: He is Alpha

When asked whether he was appointing too many people from the Clinton Administration, he told reporters:  "[U]nderstand where the vision for change comes from. First and foremost, it comes from me."  Awesome.

He seems like a really cool dude.  He drove a rusted-out car for years; and lived in a crappy apartment, even as a U.S. Senator.  Check the interview out.  He's also a fitness buff.  While many of his ideas are disastrous, his inherent manliness might mitigate the worst of them.  Obama is the rare combination of high testosterone and high intelligence.  In sum, he's the perfect embodiment of manliness.  An alpha male like Obama can stomach only so much suckling of the teat.  At some point his testosterone will demand that he cast the mooches asunder.

And now that he is President of the United States, he doesn't have to pretend that he's something he's not; or to play ball with the corrupt people who helped elected him.  He can, for probably the first time in over a decade, "be himself."  It will be interesting to see who the real Obama-as-policymaker is.  I'm beginning to think he will be much less liberal than many suspect.